After having developed and tested our DIY-upcycling-island construction kit in different environments and implementations, it´s now time to spread the word and disseminate the knowledge of building floating islands out of scrap. Joy Lohmann remembered an Interview at the entrepreneurship lab, Berlin, he had given to Prof. Günter Faltin years ago, where the founder of the German entrepreneurship-summit had asked him to build an Open-Island on a private lake in Thailand. „No, I won´t build you one. But I can teach Thai people, how to do it, when I´m around.“, he answered…

In preparation for his this years Thailand journey, Joy contacted the prolific economist who instantly agreed on a joint workshop in Chiang Mai, providing a suitable water body, local participants and a small material budget. Joy on the other side published the challenge in the growing „Makers for Humanity“-community and -together with the artlab4-collective – coordinated a 4-day Open-Island workshop with dedicated international participants. Beside two experienced Open-Islanders and great guys from better today Berlin, other folks that were around joined in.

The first day, they organized the needed materials. For this ad-hoc workshop, they decided to buy the waste from local recycling-shops and craftsmen instead of collecting it themselves. (The material acquisition always is the most time-consuming part, wich should be done from and within the community on location.) Some materials (like bamboo and huge loads of plastic bottles) were found at the construction site and in the dump yard of a befriended guest house.

On the second day, the interdisciplinary team prepared the modular floats for the 4x6m center piece, adopting and modifying the easy open-source manual. Two large sacks of fisher net were stuffed with bottles and sewed under pallets. For other floats, regular transportation bags with bottles were used for the uplift of single modules.

Then, the floats were bonded onto a bamboo grid (precautionary combined with some plastic tubes, as the bamboo could eventually get eaten by bugs after a while) and covered with additional wood and boards to form a nice deck. As in former Open-Islands, a 1000 liter tank was used as the connection between the flexible platform and a static vertical construction. The tank itself additionally serves for buoyancy and can be used for storage. (the transformation into a hydroponic farm will be subject of another workshop)

On the last workshop day, some exemplary gardens with self-watering systems through capillary action were prepared and planted. Last but not least, the makers mounted some typical Thai decoration and improvised special effects like a catapult-pendant and a free-floating basket-garden. (another remaining task for a follow-up workshop is the solar-electrification and a compost toilet to make the „Open-Island, Chiang-Mai“ an autarkic system.)

With the last rays of sunlight, the Open-Island was paddled to the jetty and the celebration began, including a ceremonial presentation of the original Open-Island certificate to Prof. Faltin. We all hope, that this little floating island not only will grow on location but also serve as an inspiration and construction sample for more Open-Islands in Thailand. 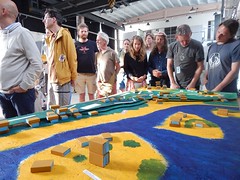 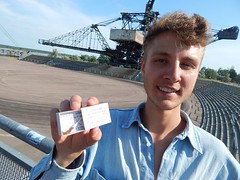 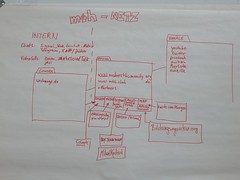